Click on the Clustrmaps map to see where our site is helping people learn about electronics...

English not your first language? Translate the text on this page to any one of over 50 languages. Select your language in the Google Translate box for an instant translation.

How to carry out resistance tests on semiconductor devices. Things you should know FIRST. To begin with it is important to say that the following methods are concerned with transistor testing for fault finding or trouble shooting, rather than with electronics design and construction, which can require some different tests and techniques. However it is unlikely that anyone ever constructed an electronic circuit without being involved in at least some fault finding.

What type of meter?

Most multi−meters are suitable for testing transistors; some have special transistor testing ranges (but that doesn't mean that they are the best models to use in all situations). It is also possible to buy dedicated transistor testers. These will generally tell you more about a transistor than an ordinary multimeter, but in most fault finding situations, a transistor that was previously working well, is now suspect. It is not usually neccesary to know about the transistor´s hfe characteristics, you need to know if it's dead! A few simple resistance or voltage checks will confirm this. Transistor testers are more useful, mainly in circuit design and construction where it may be neccesary to know about a transistor's performance in more detail.

Things to check on your meter.

First look at the meter's resistance ranges. If you are using a digital meter you should find that one of the ranges is marked with a diode symbol. This is the range you MUST use for testing transistors and diodes, don't use any other range as it won't test the device properly, and the results will just confuse you!

The problem is that on resistance ranges the meter puts a small voltage across the probes tips, so that when you connect it to the component being measured, a current flows through the component. It is this current that the meter is measuring, it just displays its result as resistance (in ohms) to save you the bother of working it out from voltage and current. The point here is that the meter uses a SMALL voltage, and a different value of voltage on different ranges. In many cases the meter voltage won't be enough to overcome the junction p.d. of the component being tested, so the junction will measure open circuit even if there is nothing wrong with it. The diode range (or whatever range the meter instruction book suggests for testing the resistance of junctions) is designed to supply just enough voltage to turn on the junction, and pass a very small current through it. This usally gives a reliable indication of the state of the junction, without confusing results, or damaging a good junction. 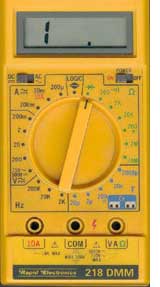 Usually digital meters display the resistance of the junction when using the diode range, which for a PN junction would typically be around 500 to 1K ohms, depending on the device being measured. However some meters display the JUNCTION VOLTAGE on this range (usually 0.5 to 0.7 volts). Make sure you know what the meter is telling you, there is sometimes a "V" in the display if it refers to junction voltage but sometimes not. Check the instruction book to be sure.

Digital meters display 1 . (one followed by a decimal point) to indicate that the resistance is too high to measure on the range you are using. Remember that since the meter is usually limited to one range when testing semiconductor junctions, this means "infinity" or open circuit for testing purposes.

Because the range of resistances measureable on the diode range of a digital meter is quite small (usually 0 to 2K) it can be preferable to use a moving coil meter such as an "Avo 8" to test transistors. 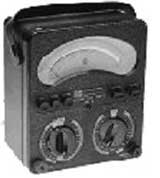 When using the resistance ranges on analogue meters such as the "Avo"(left), it is important to know that the internal battery of the meter is connected in such a way, that the Red test lead is negative and the Black test lead is positive. Therefore, when testing a junction's forward resistance, the positive (black) meter lead must go to the P side of the junction and negative (red) lead to the N side). This is opposite to connecting digital meters, where red is positive and goes to P for the forward resistance test, and black is negative and goes to the N side of the junction. The reason for this is that the battery in an analogue meter is also used to power the moving needle that indicates the measured value. For the needle to move in the correct direction (for increasing resistance) the battery supply must be in the polarity described above).

The Avo has three resistance ranges and no diode marking. However it is important that you only use the middle of the three ranges (usually marked x100 on modern meters). The reason for this is that the x1 range does not produce enough current for testing junctions, and more importantly the x10K range uses a 15V battery to supply test voltages to the probes. Putting 15V across a semiconductor junction whose forward voltage is only 0.6V will more than probably destroy it!

Home  Previous  Top of Page  Next