What you´ll learn in Module 3.1

The resistance of a conductor is measured in Ohms and the Ohm is a unit named after the German physicist George Simon Ohm (1787-1854) who was the first to show the relationship between resistance, current and voltage. In doing so he devised his law which shows the inter-relationship between the three basic electrical properties of resistance, voltage and current. It demonstrates one of the most important relationships in electrical and electronic engineering.

In simple terms, provided that the temperature is constant and the electrical circuit is not influenced by magnetic fields, then:

• With a circuit of constant resistance, the greater the voltage applied to a circuit, the more current will flow.

• With a constant voltage applied, the greater the resistance of the circuit, the less current will flow.

Notice that Ohm´s law states "In metallic conductors" This means that the law holds good for most materials that are metal, but not all. Tungsten for example, used for the glowing filaments of light bulbs has a resistance that changes with the temperature of the filament, hence the reference in Ohm´s Law to ‘at a constant temperature’. There are also components used in electronics that have a non-linear relationship between the three electrical properties of voltage, current and resistance, but these can be described by different formulae. For the majority of circuits or components, which can be described by Ohm´s Law:

Rather than trying to remember the whole of Ohm´s law, the three electrical properties of voltage, current and resistance by single letters:

Resistance is indicated by the letter R and is measured in units of Ohms, which have the symbol Ω (Greek capital O).

Voltage is indicated by the letter V (or sometimes E, an abbreviation for Electromotive Force) and is measured in units of Volts, which have the symbol V.

Current is given the letter I (not C as this is used for Capacitance) and is measured in units of Amperes (often shortened to Amps), which have the symbol A.

By using the letters V, I and R to express the relationships defined in Ohms Law gives three simple formulae: 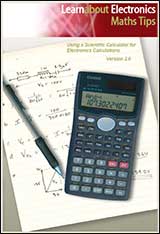 Note that when using these formulae the values of V I and R written into the formula must be in its BASIC UNIT i.e. VOLTS (not millivolts) Ohms (not kilohms) and AMPERES (not micro Amperes )etc.

How to use your calculator with the engineering notation used extensively in electronics is explained in our free booklet entitled "Maths Tips" Download it from our Download page.

Can be defined as "The amount of resistance that will produce a potential difference (p.d.) or voltage of 1 Volt across it when a current of 1 Ampere is flowing through it."

Can be defined as "The amount of current which, when flowing through a resistance of 1 Ohm will produce a potential difference of 1 Volt across the resistance."

(Although more useful definitions of an ampere are available)

Can be defined as "The difference in potential (voltage) produced across a resistance of 1 Ohm through which a current of 1 Ampere is flowing."