What you´ll learn in Module 2 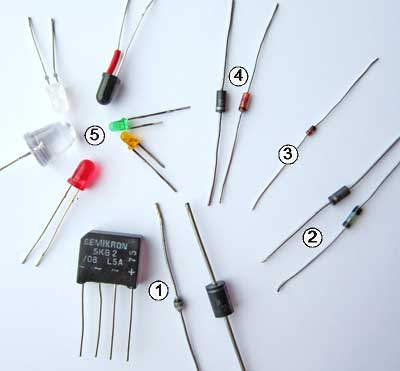 Diodes are one of the simplest, but most useful of all semiconductor devices. Many types of diode are used for a wide range of applications. Rectifier diodes are a vital component in power supplies where they are used to convert AC mains (line) voltage to DC. Zener diodes are used for voltage stabilisation, preventing unwanted variations in DC supplies within a circuit, and to supply accurate reference voltages for many circuits. Diodes can also be used to prevent disastrous damage to battery powered equipment when batteries are connected in the wrong polarity.

Signal diodes also have many uses in processing signals in electronic equipment; they are used to obtain the audio and video signals from transmitted radio frequency signals (demodulation) and can also be used to shape and modify AC signal waveforms (clipping, limiting and DC restoration). Diodes are also built into many digital integrated circuits to protect them from dangerously large voltage spikes.

Diodes are made from semiconductor materials, mainly silicon, with various compounds (combinations of more than one element) and metals added depending on the function of the diode. Early types of semiconductor diodes were made from Selenium and Germanium, but these diode types have been almost totally replaced by more modern silicon designs.

2. A point contact diode (with glass encapsulation) and a Schottky diode.

A diode is a one-way conductor. It has two terminals, the anode or positive terminal and the cathode or negative terminal. Ideally a diode will pass current when its anode is made more positive than its cathode, but prevent current flow when its anode is more negative than its cathode. In the circuit symbols shown in Fig. 2.0.2, the cathode is shown as a bar and the anode as a triangle. On some circuit diagrams the anode of a diode may also be indicated by the letter ‘a’ and the cathode by the letter ‘k’.

Which way does diode current flow?

Notice from Fig. 2.0.2 that conventional current flows from the positive (anode) terminal to the negative (cathode) terminal although the movement of electrons (electron flow) is in the opposite direction, from cathode to anode.

Modern silicon diodes are generally produced using one of various versions of the planar process, also used for manufacturing transistors and integrated circuits. The layered construction used in Silicon Planar methods give a number of advantages such as predictable performance and reliability as well as being advantageous to mass production.

A simplified planar silicon diode is illustrated in Fig. 2.0.3. Using this process for silicon diodes produces two differently doped layers of silicon, which form a ‘PN junction’. Undoped or ‘intrinsic’ silicon has a lattice structure of atoms, each having four valence electrons, but P type silicon and N type silicon are doped by adding a relatively very small amount of material having either an atomic structure with three valence electrons (e.g. Boron or Aluminium) to make P type, or five valence electrons (e.g. Arsenic or Phosphorus) to make N type silicon. These doped versions of silicon are known as ‘extrinsic’ silicon. The P type silicon now has a shortage of valence electrons in its structure, which can also be considered to be a surplus of ‘holes’ or positive charge carriers, whereas the N type layer is doped with atoms having five electrons in its valence shell and therefore has a surplus of electrons which are negative charge carriers.

When P and N type silicon are brought together during manufacture, a junction is created where the P type and N type materials meet, and holes close to the junction in the P type silicon are attracted into negatively charged N type material at the other side of the junction. Also, electrons close to the junction in the N type silicon are attracted into the positively charged P type silicon. Therefore along the junction between the P and N type silicon, a small natural potential is set up between the P and N semiconductor material with negatively charged electrons now on the P type side of the junction, and positively charged holes on the N side of the junction. This layer of opposite polarity charge carriers builds up until it is just sufficient to prevent the free movement of any further holes or electrons. Because of this natural electrical potential across the junction, a very thin layer has been formed between the P and N layers at the PN junction that is now depleted of charge carriers and so is called the Depletion Layer. When a diode is connected into a circuit therefore, no current can flow between anode and cathode until the anode is made more positive than the cathode by a forward potential or voltage(VF) at least sufficient to overcome the natural reverse potential of the junction. This value depends mainly on the materials the P and N layers of the diode are made from and the amount of doping used. Different types of diode have natural reverse potentials ranging from approximately 0.1V to 2 or 3V. Silicon PN junction diodes have a junction potential of about 0.6V to 0.7V

Once the voltage applied to the anode is made more positive than the cathode by an amount greater than the depletion layer potential, forward conduction from anode to cathode conventional current commences, as shown in Fig. 2.0.5.

As the voltage applied between anode and cathode increases, forward current increases slowly at first, as charge carriers begin to cross the depletion layer then increasing rapidly in an approximately exponential manner. The resistance of the diode, when ‘turned on’ or conducting in a ‘forward biased’ mode is therefore not zero ohms, but is very low. Because forward conduction increases after the depletion potential is overcome in an approximately following exponential curve, forward resistance (V/I) varies slightly depending on the voltage applied.

When the diode is reverse biased (the anode connected to a negative voltage and the cathode to a positive voltage), as shown in Fig. 2.0.6, positive holes are attracted towards the negative voltage on the anode and away from the junction. Likewise the negative electrons are attracted away from the junction towards the positive voltage applied to the cathode. This action leaves a greater area at the junction without any charge carriers (either positive holes or negative electrons) as the depletion layer widens. Because the junction area is now depleted of charge carriers it acts as an insulator, and as higher voltages are applied in reverse polarity, the depletion layer becomes wider still as more charge carriers away from the junction. The diode will not conduct with a reverse voltage (a reverse bias) applied, apart from a very small ‘Reverse Leakage Current’ (IR), which in silicon diodes is typically less than 25nA. However if the applied voltage reaches a value called the ‘Reverse Breakdown Voltage’ (VRRM) current in the reverse direction increases dramatically to a point where, if the current is not limited in some way, the diode will be destroyed.

The operation of diodes, as described above, can also be described by a special graph called a ‘characteristic curve’. This graphs shows the relationship between the actual currents and voltages associated with the different terminals of the device. An understanding of these graphs helps in understanding how the device operates.

The axes of the graph show both positive and negative values and so intersect at the centre. The intersection has a value of zero for both current (the Y axis) and voltage (the X axis). The axes +I and +V (top right area of the graph) show the current rising steeply after an initial zero current area. This is the forward conduction of the diode when the anode is positive and cathode negative. Initially no current flows until the applied voltage exceeds the forward junction potential. After this, current rises steeply in an approximately exponential manner.

The -V and -I axes show the reverse biased condition (bottom left area of the graph). Here it can be seen that a very small leakage current increases with the increase in reverse voltage. However once the reverse breakdown voltage is reached, reverse current flow (-I) increases dramatically.