What you´ll learn in Module 2.6

White light is made up of all the colours of the visible light spectrum, which is a very wide band of many different frequencies. Ordinary LEDs give a light output often consisting of one colour, but even that light contains electromagnetic waves covering quite a wide band of frequencies.

Any light, such as white light, that contains multiple frequencies or wavelengths, is difficult to focus to a very fine point. This is because the lens system focussing the light has a fixed focal length, but the focal length required to focus various wavelengths (colours) of light is different. Therefore each colour will focus at different points, causing what is called ‘chromatic aberration’. This can be seen, even in good quality lens systems as coloured fringing around images seen through the lens.

The light from a laser contains only a single frequency and therefore can be focussed by even a simple lens system to an extremely small point. There is no chromatic aberration since only one wavelength exists, also all of the energy from the light source is concentrated into a very small spot of light. Typically the diameter of the focussed light beam from a laser such as that found in a CD player would be about 1.6µm (less than two thousandths of a millimetre). This means that if the laser diode output was only 0.5mW the focussed (infra red) power of the beam (allowing for losses in the focussing lens) would be about 12kW/cm2.

Low power Lasers are used in an increasing number of familiar applications including CD and DVD players and recorders, bar code readers, security systems, optical communications and surgical instruments. LASER is an acronym (a bunch of initials made into a word) for: 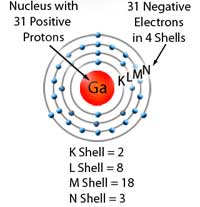 Light Amplification by the Stimulated Emission of Radiation

The name gives a description of how the device works, so long as a few basic principles are understood.

The Basics of an Atom

Everything in the universe is made up from only about 100 different atoms, either in a pure form (an element), or in an unlimited number of combinations (compounds and mixtures). Atoms are constantly in motion. They continuously vibrate, move and rotate. Even solid materials are actually in motion. This motion is called excitation. Atoms can be in different states of excitation. In other words, they can have different levels of energy. If a lot of energy is applied to an atom via heat, light, or electricity, it can leave what is called the ground-state energy level and go to an excited level. The level of excitation depends on the amount of energy applied to the atom.

Fig. 2.6.1 is a simplified diagram of an atom. It consists of a nucleus (containing protons and neutrons) surrounded by an electron cloud, although in this simplified electronics model the neutrons are ignored as they have no electric charge, and it´s also helpful to think of the electrons orbiting the nucleus in several fixed orbits. Although other models of the atom do not depict discrete orbits for the electrons, it can be useful to think of these orbits as the different energy levels of the atom. In other words, if some heat is applied to an atom, some of the electrons in the lower energy orbits would jump to higher energy orbits further away from the nucleus. This is a highly simplified view of things, but contains the basic idea of how atoms work in terms of lasers.

As an atom absorbs energy and some of its electrons jump to a higher-energy orbit, it eventually wants to return to the ground state. When it does, each electron releases its energy as a photon − a particle of light. Atoms can be seen releasing energy as photons all the time. For example, when metal glows red hot, the red light seen is the atoms of the hot metal releasing red photons. When looking at a picture on a TV screen, what you are seeing is phosphor atoms that coat the screen, or the surface of white LEDs being excited as electron of high energy atoms releasing photons, and directly or indirectly producing different colours of light. Many devices produce light in this way − fluorescent lights, neon signs, LED street lighting and even traditional incandescent light bulbs, all emit light through the action of electrons changing orbits and releasing photons.

There are several variations of construction used for laser diodes, each aimed at achieving the maximum efficiency for converting electric current into laser light.

Fig. 2.6.2 shows a simplified construction for a laser diode, which in this case is similar to a light emitting diode (LED) in that it uses gallium arsenide, doped with elements such as aluminium, silicon or selenium to produce P type and N type semiconductor materials. However a laser diode has an additional active layer of un-doped (intrinsic) gallium arsenide only a few nanometers thick, sandwiched between the P and N layers, effectively creating a PIN (P type/Intrinsic/N type) diode. It is in this layer that the laser light is produced.

The laser diode passes a large amount of forward current from P to N. Much greater than that used in a LED as the Laser diode will only produce laser light when operated at above about 80% of its maximum current.

Under these conditions the atoms are in a highly energised (pumped) state, and as charge carriers (electrons and holes) enter the active layer at the PN junction. Electrons are at an energy level higher than that of the holes, and as the electrons and holes re-combine energy is lost in the form of photons. The photons produced, all oscillate at a particularly precise frequency as they ‘bounce’ up and down between the light reflective walls of the active layer. Some photons collide with other atoms and so create additional energised electrons that produce even more photons. This process is called ‘pumping’ and increases the number of highly energised electrons until there are more electrons in the excited state than in the un-energised ‘ground’ state. At this point, known as population inversion, a constant stream of coherent or laser light is produced, as the extra excited photons more than make up for any losses due to photons being re-absorbed within the semiconductor material. Because the photons oscillate at a single precise frequency they produce laser light that has only a single wavelength.

As the photons increase in number, the light increases in power. Although some light escapes in different directions or is absorbed within the semiconductor material, some of the photons run in a direction parallel to the laser´s axis, as shown in Fig. 2.6.4 these bounce back and forth off the ends of the laser material. The end surfaces are very accurately cut and polished to create parallel reflecting mirrors. The distance between these reflecting surfaces is an exact multiple of one wavelength, so that as the light waves (the photons) reflect from each end of the cavity, they stay in phase. The amplitude of the reflected wave adds to the amplitude of other waves within the cavity, so the waves keep adding as they bounce backwards and forwards between the mirrors. In this way, the active layer forms a ‘Resonant Cavity’ that aids the amplification of the light. As the photons pass through the crystal laser material, they also stimulate emission in other atoms. As a result, amplified, monochromatic, single-phase light leaves the resonant cavity of the laser through the partially reflecting mirror.

Fig. 2.6.5. Comparison between a LED
and a Laser diode

A laser diode is basically a LED producing laser light; to do this the laser diode is operated at a much higher current, typically about 10 times greater than a normal LED. Fig. 2.6.5 compares a graph of the light output of a normal LED and that of a laser diode. In a LED the light output increases steadily as the diode current is increased. In a laser diode however, laser light is not produced until the current level reaches the threshold level, when stimulated emission starts to occur. The threshold current is normally more than 80% of the maximum current the device will pass before being destroyed! For this reason the current through the laser diode must be carefully regulated. Another problem is that the emission of photons is very dependent on temperature, the diode is already being operated close to its limit and so gets hot, therefore changing the amount of light emitted (photons) and the diode current. By the time the laser diode is working efficiently it is operating on the brink of disaster! If the current reduces and falls below the threshold current, stimulated emission ceases; just a little too much current and the diode is destroyed.

As the active layer is filled with oscillating photons, some (typically about 60%) of the light escapes in a narrow, flat beam from the edge of the diode chip. As shown in Fig 2.6.6 some residual light also escapes at the opposite edge and is used to activate a photo diode, which converts the light back into electric current. This current is used as a feedback to the automatic diode driver circuit, to measure the activity in the laser diode and so make sure by controlling the current through the laser diode, that the current and light output remain at a constant and safe level.

For these reasons, laser diodes are rarely used on their own; they are normally supplied as a laser diode module, which contains:

The laser diode module is a self-regulating circuit that senses its own light output and automatically regulates the supply current and temperature to keep the diode operating in the critical conditions where laser light is produced. 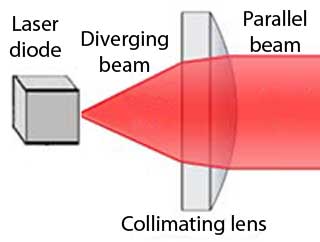 The beam of light produced by the laser diode still needs some modification to change it from an elliptical, spreading beam produced as the laser light leaves the thin active layer of the diode, into a circular parallel beam. This process is carried out by an optical device called a collimating lens (Fig. 2.6.8). This may be a simple spherical lens or an aspherical type, which can convert an elliptical beam into a circular one.

Laser diode modules are available complete with optics and electronics. A typical module would feature facilities such as built-in power stabilisation, built-in slow start and heat sink. Low power modules (Class 2) are used in laser pointers, bar-code readers, sighting, levelling and positioning equipment, as well as a wide range of educational and laboratory uses. They produce a continuous wave, rather than a pulsed wave output, at various wavelengths between 500nm and 900nm, and so have different colours of laser light (green at 532nm and red at 650nm) as well as infra-red and near infra-red. They are simple to use, requiring typically a 3V to 5V DC supply to operate.

Lasers are classified into four broad areas (plus sub areas) depending on the potential for causing biological damage. When you see a laser, it should be labelled with appropriate class designation, briefly described below:

Equipment using lasers of any of the above classifications will be found to carry a warning label similar to those in Fig. 2.6.9 outlining the hazards and the classification of the laser used.

The above list is an abridged version of the laser specifications contained in the IEC 60825-1 standard and should not be relied on as a comprehensive guide. The full standard, together with other relevant safety information can be purchased from the International Electrotechnical Commission Webstore