What you´ll learn in Module 2.3 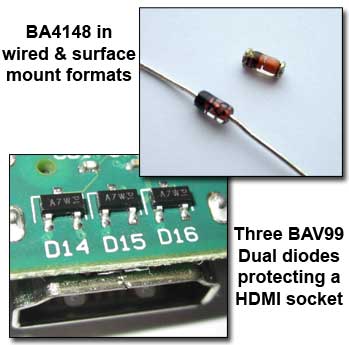 Many electronic systems use small signals, these can be categorised as AC (continuously varying) signals or pulses whose amplitude is limited to a few volts, or in many cases a few milli or even micro volts. Such uses include radio, audio and video signals as well as digital signals that may be found in the home, in industrial equipment, automotive, aeronautic and musical systems.

There are very many small types of signal diodes available in both wire ended and surface mount (SMT) format. They differ from rectifier diodes in several ways, they generally have smaller junction areas giving the junction less capacitance making them more useful at higher frequencies. High speed small signal diodes, often called switching diodes are designed to be used in circuits with high frequency or fast pulses and have a very fast ‘Reverse Recovery Time’, typically a few nanoseconds or less. They are physically smaller than dedicated power rectifiers and have lower maximum reverse voltage parameters. Some designs are for general purpose use and others for more specialised purposes. The basic construction for a silicon planar diode is to infuse a layer of doped silicon (e.g. N type) with a region of P type silicon for example, as shown in Fig. 2.3.2. In this simple example, a layer of N type silicon has a layer of P type silicon infused into its upper surface and a PN junction is formed. However the curvature of the junction makes the parameters of the diode more difficult to predict accurately and one way to produce an improved small signal diode is shown in Fig. 2.3.3.

After the P type layer is created, and while the diode is still part of a silicon wafer containing many identical components, a section of the PN block is etched away to form what is known as a Mesa (an isolated high topped plateau) Diode. This device now has a smaller junction area, giving a lower junction capacitance and a flatter junction giving more predictable characteristics. Additionally the N type layer is divided into two layers, a N- (lightly doped) and a N+ (heavily doped) layer, which gives a better distribution of electric charge across the diode, helping to reduce the reverse potential across the junction and to a give better reverse voltage capability. The sides of the ‘mesa’ are also coated with an insulating layer of either silicon oxide or glass to ‘passivate’ the junction area protecting it from deterioration due to oxidisation. Such modifications produce a more reliable diode with more accurately controlled characteristics.

Signal processing may also require the process of clipping, which is a process much the same as rectification, that is altering the shape of a wave by removing part or all the positive or negative peak of a wave. Clipping action on a sine wave is shown in Fig. 2.3.4.

In Fig.2.3.4(a) a simple circuit consisting of a resistor and diode is used to clip the positive half cycles of a sine wave. Assuming an ideal diode (with zero junction potential) is used, the output wave will be half the amplitude of the input wave and completely negative going.

In Fig. 2.3.4(b) the diode is simply reversed and now (again assuming an ideal diode) the negative half cycles are removed, leaving just the positive half cycles of the sine wave.

In Fig. 2.3.4 (c) two diodes are used, and this time it is assumed that the diodes are not theoretical ideal diodes, but small signal silicon types. These will have a forward junction potential of about 0.7V and so do not clip the sine wave at 0V, but at +0.7V and -0.7V leaving a square(ish) wave of 1.4Vpp.

In practical silicon diodes the anode must be more positive than the cathode by a certain amount. A Silicon junction diode must have an anode voltage which is about 0.7v more positive than its cathode before current will flow. If the waveforms with which the diode is used are fairly large, then the small voltages mentioned above are insignificant. In Fig. 2.3.5 the same clipping circuit as that shown in Fig. 2.3.4(a) is used, (actually with a 1K resistor and a BA4148 diode). This circuit should remove the positive half cycle of the waveform, and with a sine wave input of 20Vpp it does quite a good job. The output wave was carefully measured and found to be 10.7Vpp. Assuming that the waveform has a large amplitude, the output wave will be close enough to half the amplitude of the input wave.

In Fig. 2.3.6 the same circuit is used but with an input wave of only 2vpp. This time the output wave is not too different from the input wave above it on the CRO screen. Its a bit squashed on the positive half cycles and also rather rounded instead of being flat. The reason for this is firstly because the junction potential of the diode is nearly half the peak to peak value of the wave so hardly any clipping of the positive half cycles takes place. Additionally the ‘clipped’ half cycle is rounded because the junction potential is only ‘about’ 0.7V. In fact the diode begins to conduct when the forward bias is about 0.5V and is just about fully conducting at about 0.7V. Remember that the diode characteristic curve shown in Fig. 2.0.7 (on the Diodes page 2.0) showed how the current increases in an exponential curve in the forward biased condition. This also means that the forward resistance of the diode is not constant but varies (slightly) depending on the slope of the curve and will have slightly different values at different forward current values.

Diodes can be used to clamp some point on a waveform to a particular DC level. Sometimes also called ‘DC Restoration’ a simple circuit consisting of a diode and a capacitor can be used to set the DC level of an AC wave to any required level. This can be useful in many electronic systems, for example a digital circuit where the upper or lower limits of square waves or pulses are required to have specific voltage values, or video circuits where the brightness of any picture element depends on a particular voltage.

Fig. 2.3.7 illustrates a typical situation where clamping may be needed. When an AC signal passes through a number of stages (individual circuits such as a series of amplifiers) within a system, it is quite possible that the original DC level of a waveform will be altered. A DC restorer or clamp circuit in the final stage can then be used to restore the original DC level or set a new DC level as required. A simple clamping circuit can do this by clamping one point (e.g. the upper or lower tips of the waveform) to an appropriate voltage.

A simple DC restorer or clamp circuit is shown in Fig. 2.3.8 and consists of a capacitor and a diode. The resistor RL represents the load on the circuit but also forms a time constant with the capacitor (C). The operation of the circuit is as follows:

Initially suppose that the capacitor C is fully discharged and has 0V on both plates.

As the input waveform goes positive the changes in voltage occurring at the left hand plate are passed through to the right hand plate. As this plate also goes positive, the diode D1 will be reverse biased and will not conduct, and so far plays no part in the action.

The left hand plate of C continues to go negative, due to the input wave, and C begins to charge at a rate that depends on the time constant T = C x the forward resistance of the diode, which will be very low, so giving a very short time constant. When the input wave reaches its most negative value, C is charged to a value that is the same as negative peak value of the wave (e.g. -5V).

Provided that during following cycles, only a little of the DC voltage on the output is allowed to leak away, each time the input wave goes negative and returns to zero, the capacitor will charge sufficiently through the diode to hold the DC level of the output wave constant. Therefore the action described above sets the DC level of the output such that the negative peaks of the wave are always at 0V, i.e. the negative tips of the waveform are CLAMPED to zero volts. For this reason the circuit is called a ‘Clamping Circuit’. The two time constants created by the diode in Fig. 2.3.8 switching on (short time constant) and off (long time constant) fulfil the necessary criteria to produce the shift in level of the output waveform that can be seen in the Spice analysis shown in Fig. 2.3.9.

It also may be that a waveform needs to be clamped to some other value than the negative tips described above. To clamp the positive tips of the waveform to 0V so that the whole waveform is negative only requires that the diode is connected the opposite way round, with its cathode connected to 0V. If a clamping level, and therefore a DC level of the wave of some other value is required, this can be easily arranged as shown in Fig. 2.3.10 by connecting the anode of the diode to some potential. Fig. 2.3.10(a) shows how a zener diode may be used to obtain an accurate clamping level and Fig. 2.3.10(b) shows how a variable clamping level may be obtained from a potential divider network.

Diodes used for high frequency applications need to have as low a junction capacitance as possible and a very short Reverse Recovery Time (trr) to enable them to switch from conducting to non-conducting mode and back again as quickly as possible. Small signal diodes can generally be divided into fast and ultra fast diodes. Fast types, such as the popular 1N4148 have a trr parameter of 4 to 8ns, making it suitable for use on VHF signals having a frequency of up to about 100MHz. Ultra fast diodes, which are usually Schottky designs can have trr figures measured in pico seconds, making them suitable for use up to UHF and microwave frequencies. Both fast and ultra fast diodes are physically very small and have very small junction areas. Schottky diodes in particular also have a low junction potential of around 0.2V (similar to the older germanium diodes) compared with around 0.6V for silicon PN junction diodes, this makes Schottky signal diodes particularly suitable for RF applications such as demodulation, where the audio or video signal is retrieved from the radio frequency carrier wave.

Diodes are used in many circuits to protect other semiconductor devices against excessive voltages and sudden voltage spikes present on external power supplies, or back emf spikes caused when inductive loads such as motors and relays are switched off. Fig. 2.3.11 shows a typical application where three BAV99 Dual diodes are being used to protect a HDMI input against over voltage or spikes.

In the circuit shown in Fig.2.3.11 each of three digital input lines from a HDMI socket is being prevented from attaining a voltage higher than +5V as pin 2 of each BAV99 is connected to the +5V supply, so that if a voltage higher that +5V occurs on any of the relevant HDMI input pins (13,15 or 16) connected to pin 3 of each BAV99, the upper diode will conduct and clamp the input line at 5V (plus the forward junction potential which, according to the data sheet for the BAV99 can vary between 0.715V and 1.75V, depending on the forward current). Similarly any voltage on the input line that falls below zero volts will be clamped by the diode between pins 1 and 3.

Other methods and applications for using protection diodes are discussed in relevant modules on Learnabout-electronics, click any of the links below to find out more.